The Federal Reserve Board on Tuesday announced preliminary results indicating that the Reserve Banks provided for payments of approximately $92.0 billion of their estimated 2016 net income to the U.S. Treasury. The 2016 audited Reserve Bank financial statements are expected to be published in March and may include adjustments to these preliminary unaudited results.

The Federal Reserve Banks' 2016 estimated net income of $92.7 billion represents a decrease of $7.6 billion from 2015, primarily attributable to a decrease of $2.5 billion in interest income from changes as a result of the composition of securities held in the Federal Reserve System Open Market Account (SOMA) and an increase of $5.2 billion in interest expense associated with reserve balances held by depository institutions. Net income for 2016 was derived primarily from $111.1 billion in interest income from securities held in the SOMA (U.S. Treasury securities, federal agency and government-sponsored enterprise (GSE) mortgage-backed securities, and GSE debt securities). Operating expenses of the Reserve Banks, net of amounts reimbursed by the U.S. Treasury and other entities for services the Reserve Banks provided as fiscal agents, totaled $4.0 billion in 2016. In addition, the Reserve Banks were assessed $700.7 million for the costs related to producing, issuing, and retiring currency, $709.0 million for Board expenditures, and $596.2 million to fund the operations of the Consumer Financial Protection Bureau. The Reserve Banks had interest expense of $12.0 billion associated with reserve balances and term deposits held by depository institutions, and incurred interest expense of $1.1 billion on securities sold under agreement to repurchase. Additional earnings were derived from income from services of $435 million. Statutory dividends paid to member banks totaled $711.5 million in 2016. No income was transferred to surplus due to the $10 billion aggregate surplus limitation as required by the Federal Reserve Act.

The attached chart illustrates the amount the Reserve Banks distributed to the U.S. Treasury from 2007 through 2016 (estimated). 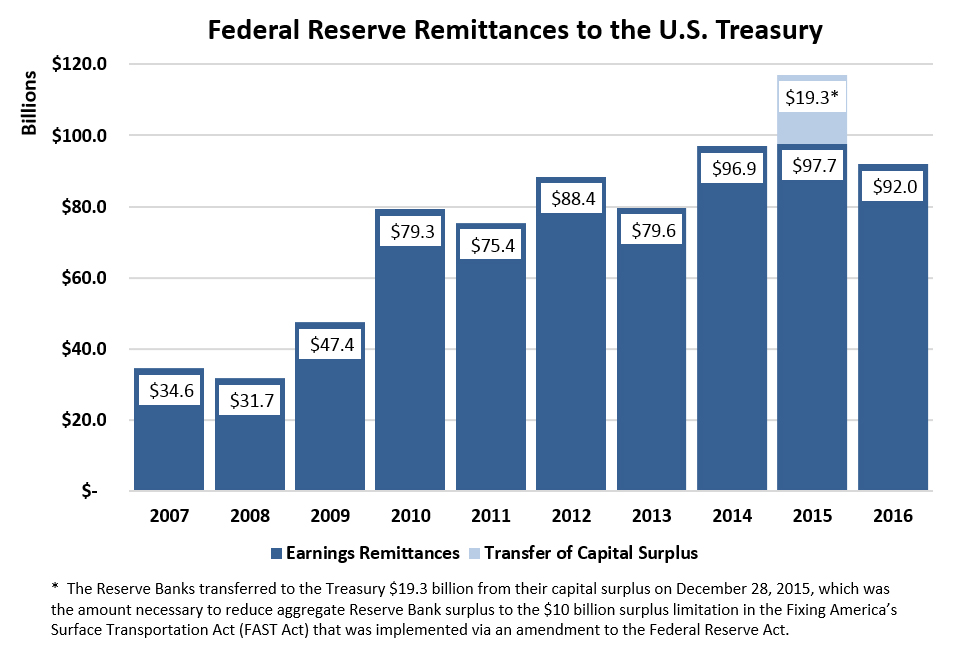