The Federal Reserve Board on Wednesday announced preliminary results indicating that the Reserve Banks provided for payments of approximately $80.2 billion of their estimated 2017 net income to the U.S. Treasury. The 2017 audited Reserve Bank financial statements are expected to be published in March and may include adjustments to these preliminary unaudited results.

Operating expenses of the Reserve Banks, net of amounts reimbursed by the U.S. Treasury and other entities for services the Reserve Banks provided as fiscal agents, totaled $4.1 billion in 2017. In addition, the Reserve Banks were assessed $724 million for the costs related to producing, issuing, and retiring currency, $740 million for Board expenditures, and $573 million to fund the operations of the Consumer Financial Protection Bureau. Additional earnings were derived from income from services of $442 million. Statutory dividends totaled $784 million in 2017.

The attached chart illustrates the amount the Reserve Banks distributed to the U.S. Treasury from 2008 through 2017 (estimated). 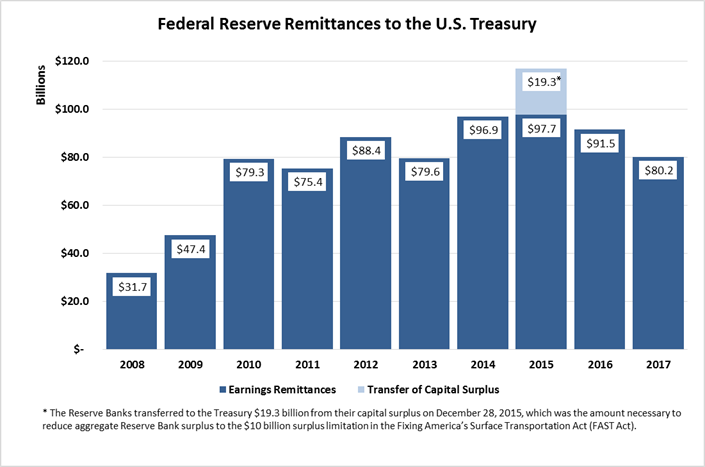